Thiruvalluvar is celebrated as a great Tamil Poet. Actually his real name is Valluvar. Due to his divine characters including high discipline and his books hidden quality, has created thirumai (divine quality) to him, thereby thiru is amalgamated in front of Valluvar’s name and called as Thiruvalluvar.

There is no proper record about in which century he lived but it is a guess that he might have lived between 3rd century and 7th century (Tholkapiar period). It is say, that first Thiruvalluvar lived in Madurai and later he lived in Maylapur. When he was in Madurai he was worked in kingdom and later he shifted to Mayalapur presently known as Chennai.

His Mother name is Aadhi and his father name is Bhagavan. In respect to their parents he wrote first kural using his parents’ name. 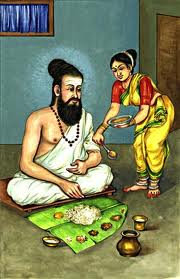 His wife name is Vasuki. She was pure and dedicated lady, an ideal wife. She never disobeyed the orders of her husband.

One day Thiruvalluvar was taking cold rice in the morning. He said to his wife: “Vasuki, the rice is very hot, bring a fan (hand fan) to cool it”. At that moment, Vasuki was drawing water from the well. When her husband called her; at once she left the rope and sprinted to him with a fan to cool the rice. She did not argue to her husband: “How can the cold rice be hot? Why do you want a fan now?” She just obeyed his instructions. The container that contained water was hanging in half-way inside the well without support; this shows her Pativrata Dharma Shakti.

The candidates noticed this phenomenon and the noble conduct of Vasuki and were simply struck with amazement.

Thiruvalluvar earned a living by weaving cloth and selling it. A small story to know about his divine character.